Cataloguing Mission at the Bibliotheka Jagellońska in Krakow: Insights in the Berlinka Collection

At the end of March 2022 (27/03- 04/04/2022), Dr Margherita Matera (Akademie der Wissenschaften zu Göttingen), accompanied by Eva Tivelli, a guest scholar at the Göttingen Academy, went to Krakow to consult and catalogue some manuscripts of the Psalms belonging to the Berlinka Collection, nowadays preserved in the Bibliotheka Jagellońska.

The autopsy surveys have offered many ideas for the subsequent research phases of the project, bringing a significant enrichment to the database of the Project “Die Editio critica maior des griechischen Psalters”.

The Berlinka is a very famous manuscript collection deriving from the already renowned Preußische Staatsbibliothek, which contained the manuscripts owned by the Bibliotheca Regia Berolinensis.  In the last years of the Second World War, some of the manuscripts belonging to the aforementioned Prussian collection were dispersed throughout the territory of the old Reich, and many of them, after countless vicissitudes, are now preserved in various European libraries [i]. 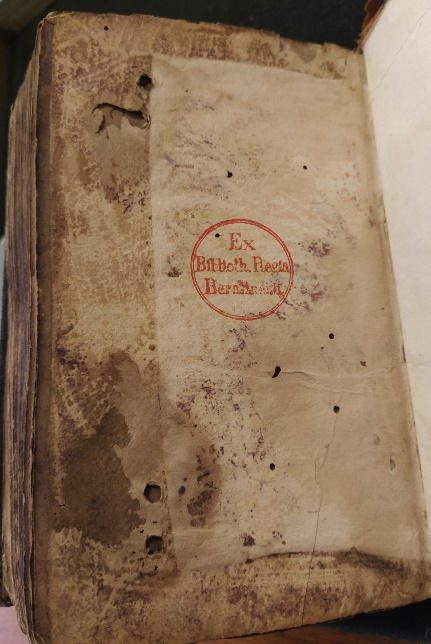 The collection preserved in Krakow represents a book fund of particular interest: it was long disputed between Germany and Poland in the post-war period, and since 1981 it has been accessible to the public [ii]. The Berlinka, as a legacy of the Preußische Staatsbibliothek, contains many valuable manuscripts, such as the autograph musical scores of great composers such as Mozart, Beethoven, Chopin and Schumann, together with some manuscript Bibles of Martin Luther himself. During the stay in Poland, it was also possible to see some autograph copies of Beethoven displayed to the public during the temporary exhibition “Beethoven - the father of great symphonism” organized for the 26th Easter Festival Ludwig van Beethoven.

The main reason that led us to approach the library of Krakow, however, was the presence of the eight Greek manuscripts of the Psalms, which, because they belong to a such disputed collection, have never been extensively studied; some of them have been considered lost for a long time, reappearing only in recent years.

One of the 505 coffers that formed one lot of the Berlin collection was transferred in 1947 to the Bibliotheka Jagellońska, and it was found only in 2016, hidden in the convent of the Holy Trinity in Krakow [iii]; this little treasure, forgotten for sixty years, contained twenty Greek manuscripts and many others of different nature (Latin, Oriental, etc.) [iv].

Here below a brief overview of the Psalter manuscripts analyzed during the mission:

Here is a brief description of some of the manuscripts examined by Dr Matera:

These are ten parchment leaves containing part of the commentary on the Psalms of Euthymius Zigabenus (until Ps 4:4a, PG 128 coll. 40-93d). The folios, measuring 300x220mm and containing from 35 to 44 lines of writing, belonged to a codex from Sinai [vii]. The manuscript is written in black ink and in a minuscule script, dated to the 13th c., which recalls the style “Epsilon à pseudo-ligatures basses” [viii]. 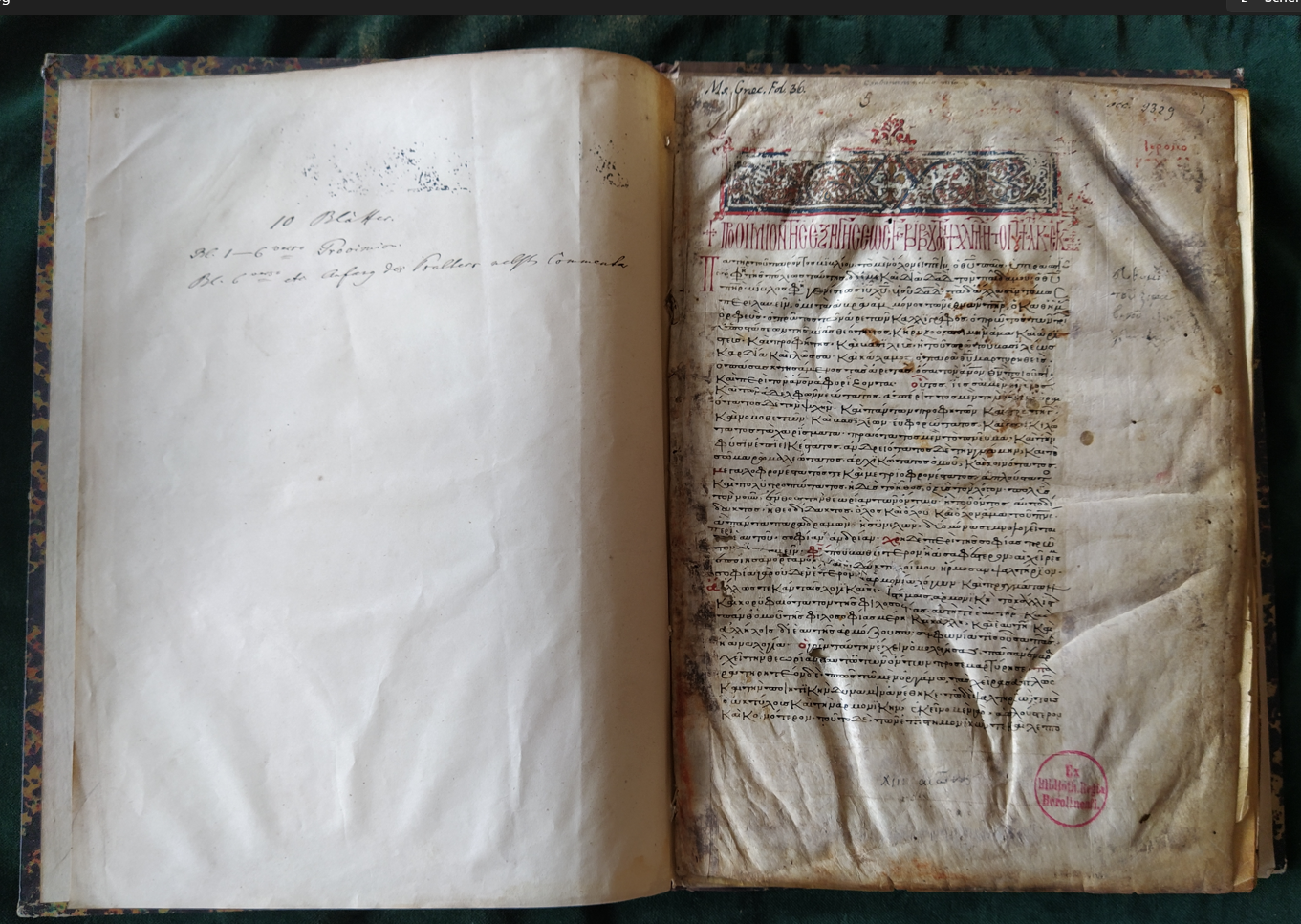 It is a small format psalter written in “Maiuscola ogivale inclinata" dated to the 9th c. and measuring 75x120mm. 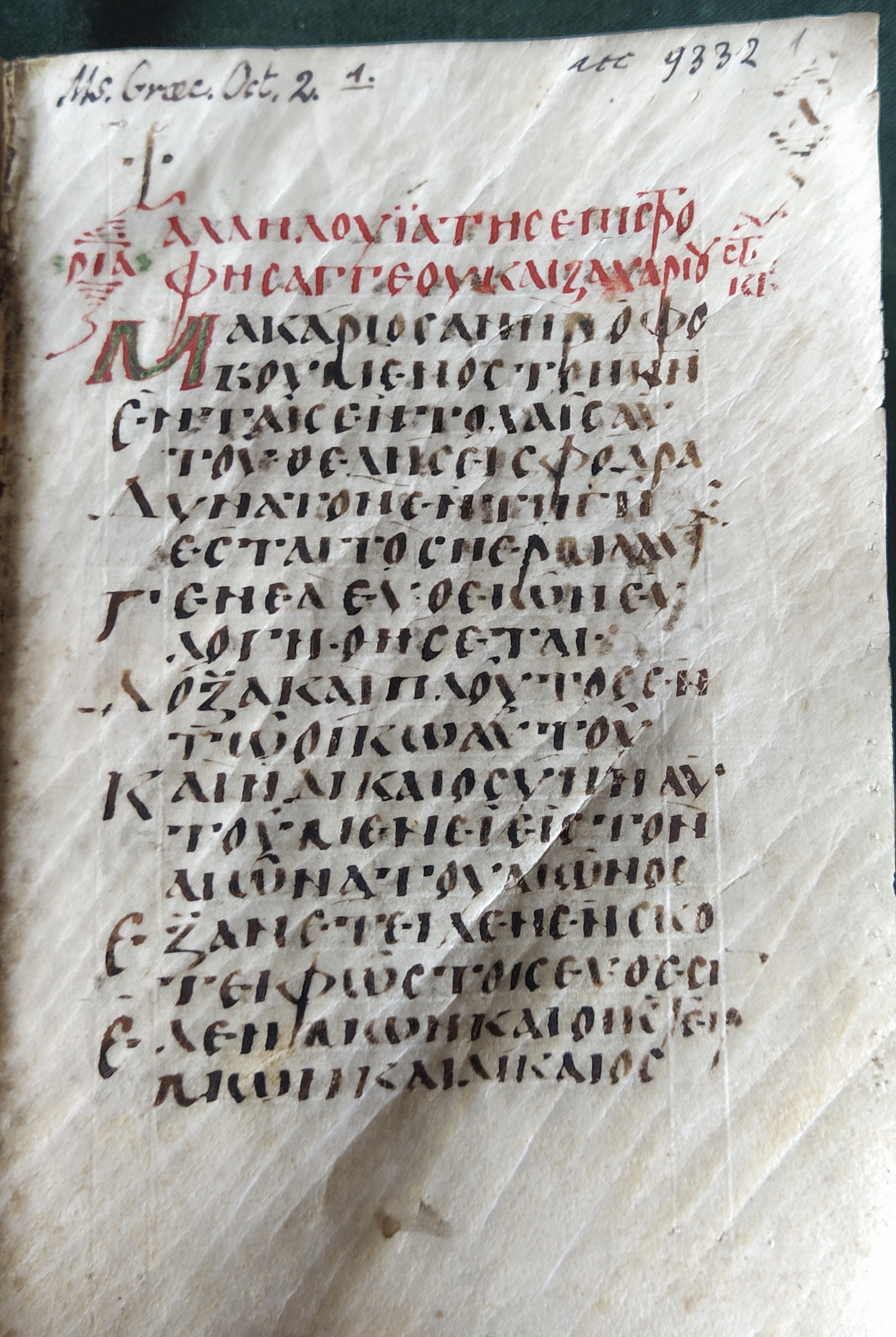 A cross and a numeral are placed in the upper margin of each first folio recto of a quire to mark the beginning of each new quire; the numeral is then repeated in the lower margin of the last folio verso. The ink is black, the titles are rubricated in red, and the initials are written in red and coloured in light green ink. The manuscript has the indication of the quires from λ΄ to λθ΄: the quire λθ΄ is followed by κη΄, containing ff. 81r-88v is erroneously placed at the end of the manuscript (cf. supra).

This misconstruction is soon explained: the 88 leaves that make it up originally belonged to the Sinait. gr. 37 (Ra 1194, pp. 287-288). In 1850, 6 leaves of the Sinaiticus were brought to Saint Petersburg by Nikolaji Kyrlov, where they are still preserved nowadays (Sankt-Peterburg Rossijskaja Akademija Nauk, Biblioteka, Nikоlskii MS 3). In 1866, Heinrich Karl Brugsch took another 88 folios to Berlin, and they are now kept in Krakow (Ra 1194). The rest of the leaves of Sinait. gr. 37 is divided between the Sinaitic manuscripts NE gr. ΜΓ 007 and ΝΕ gr. ΜΓ 051 [x].

It is a small-sized Psalter measuring 113x86mm and containing 206 parchment leaves, except for ff. 121-122 and 208, which are paper additions written by a later hand. 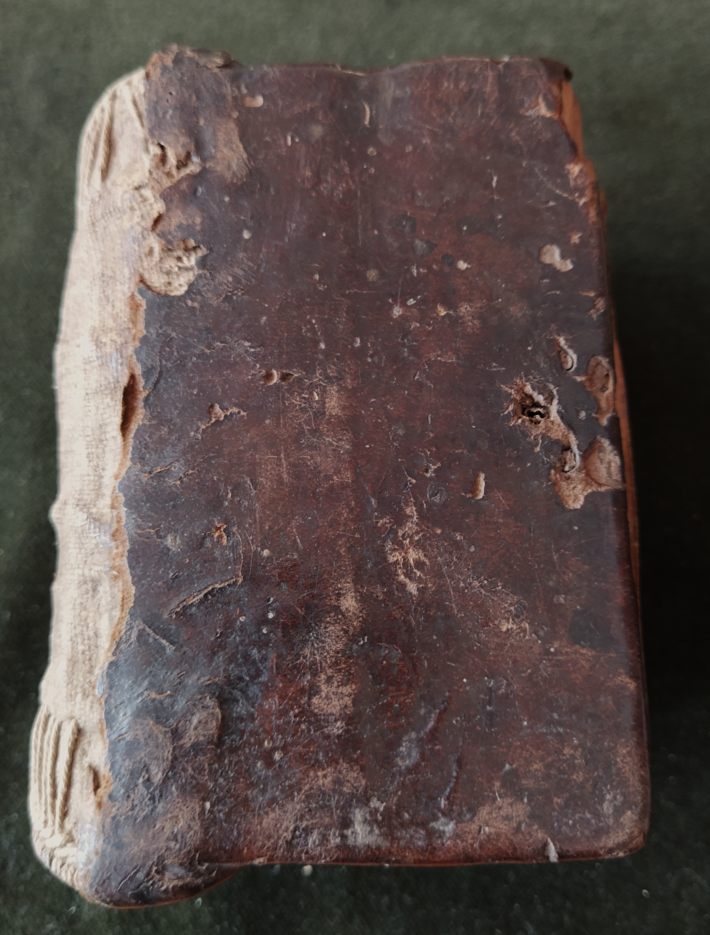 This small manuscript contains Psalms 34:4 to 151 + Odes 1-9, 12, followed by some liturgical texts. The text is written in a minuscule script called “bouletée” dated to the 10th c., accompanied by marginal notes (in red ink) and enriched with finely decorated initials and other ornaments. The Psalter has an ancient binding, maybe original. Its current state of conservation is terrible: it has lost numerous leaves, and in several places, the marginal decorations have been removed, damaging the parchment.

About the provenance of this codex, De Boor writes in his catalog: “A. 1880 von einem Inselgriechen zu Paris gekauft” [xii]. 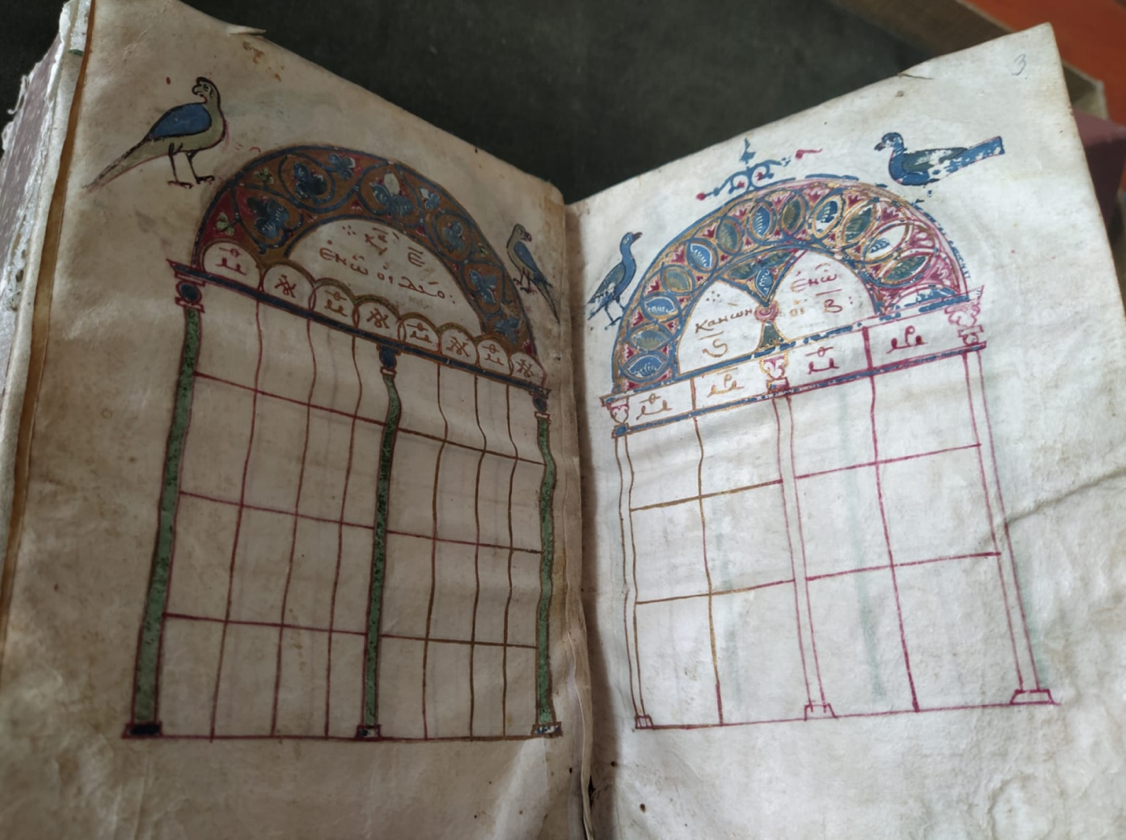 This manuscript also has an ancient binding.

The ancient indication of the quires is still visible: α´-μ´. 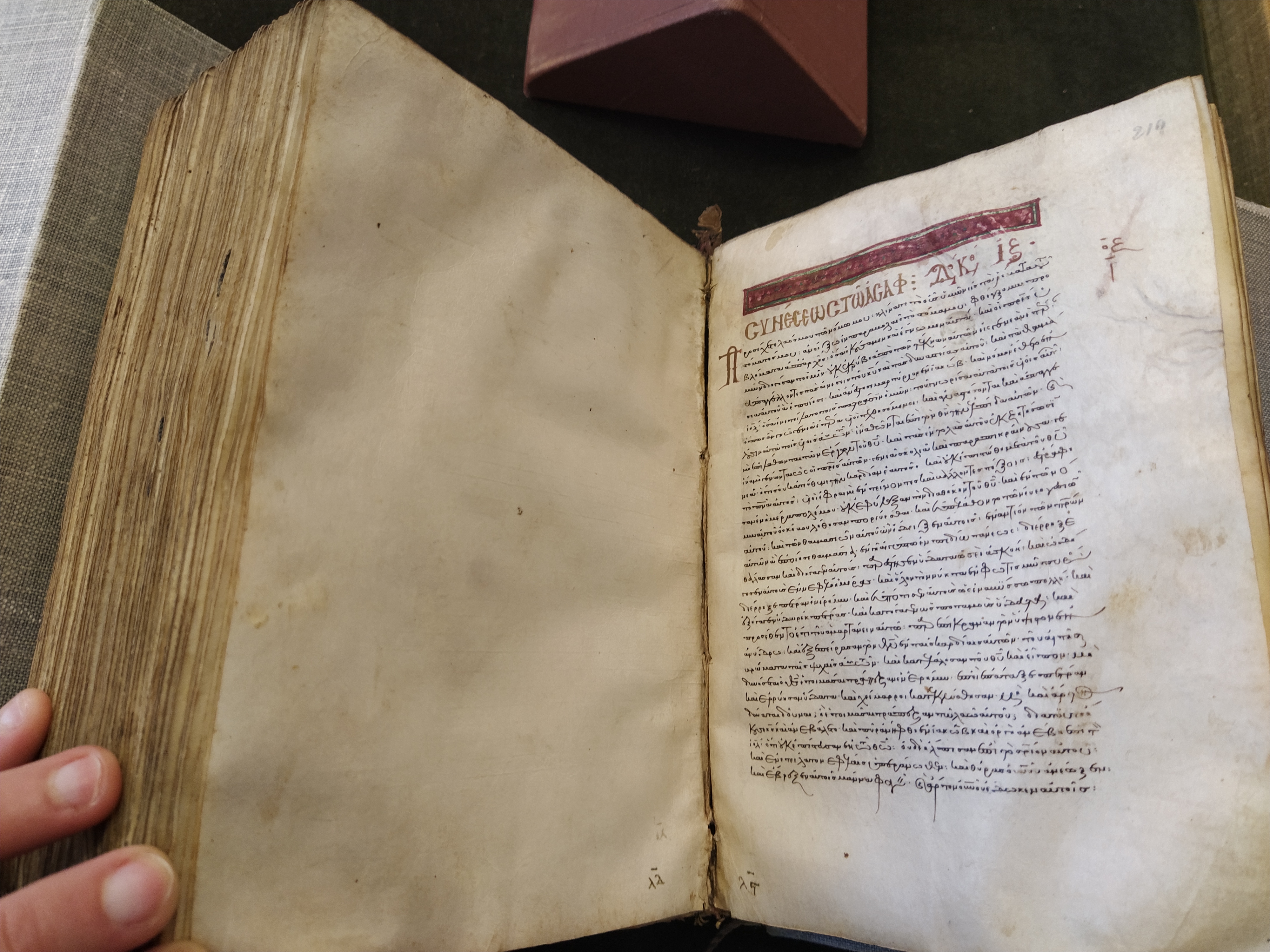 According to de Boor, this manuscript was acquired in July 1885 in Smyrna by Pastor Philip Meyer [xiv].

We want to thank the person responsible for the manuscript section, Dr Elżbieta Knapek, and all the staff of the Bibliotheka Jagellońska for their willingness and professionalism and for allowing us to study some of the treasures of the Berlinka Collection.

[x] Parpulov, G., Greek and Latin Manuscripts at Sinai, in St Catherine’s Monastery at Mount Sinai: Its Manuscripts and their Conservation, (Papers Given in Memory of Professor Ihor Ševčenko, 27 November 2010), London, Saint Catherine Foundation, 2011, 34-42, on p. 41.