A Description of Composite Psalter Manuscripts: Some Examples

Among the manuscripts our project deals with, some can be defined as composite and challenging. In other words, those manuscripts whose original shape – for events related primarily to their history (past or recent) – is no longer understandable.

These are:- miscellaneous collections of fragments originating from several manuscripts and nowadays gathered in a single codex;- dismembered manuscripts whose parts are scattered between various libraries.

The reasons that made these manuscripts so composite often remain unknown.Regarding the miscellaneous collections of fragments, which often contain inhomogeneous texts, we do not know who was the artificer of their "creation". We can assume, for example, that these fragments were put together to respond to the will (or whim) of an intellectual/owner interested only in specific passages of a certain text.However, it is also possible to imagine that someone, finding the fragments already dismembered in a library (or collection), wanted to put them together, realising a salvage operation in their regard.

In some cases, we know that some scholars, returning home after some research missions, had the habit of taking portions of manuscripts interesting for their studies, enriching their collections in this way. Excellent examples of this habit are the Sinaitic codices from which scholars such as Porfirij Uspenskij (1804–1885) and Constantin von Tischendorf (1815–1874) have taken away portions now preserved in the library of San Petersburg (see examples below).

To the so-called membra disiecta belong many witnesses described by Rahlfs, such as Ra 1152, Ra 1197 [i] and Ra 1198 [ii]. These manuscripts originate from Sinai, but some of their folios are now preserved at the Rossijskaja Nacional'naja biblioteka (RNB) in Saint Petersburg.

For example, the manuscript Sinaiticus gr. 45 (no Rahlfs number), which contains the Psalms (7 to 122) and the Odes, together with some liturgical texts, has a major lacuna between Psalm 54:22 and Psalm 59:12. This manuscript was dismembered (we know nothing more about this dismemberment), and its missing eight folios are now kept in Saint Petersburg [iii] under the shelfmarks:

It should also be added that the manuscript Sinait. gr. 45 (to which the fragments belong) has been restored, probably during the Middle Ages, using pieces of parchment (sometimes palimpsest) coming from codices of different eras. 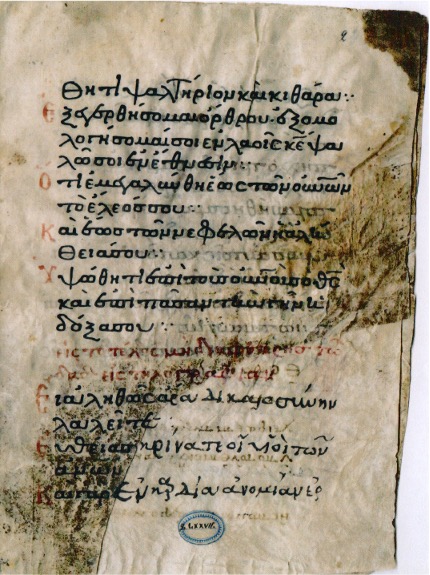 An example of a composite manuscript is Ra 1585–88 [iv] which includes some parchment fragments kept today in the Biblioteca Statale del Monumento Nazionale di Grottaferrata. These fragmenta disiecta consist of a few folia, two of which are written on palimpsest parchment, deriving from different manuscripts (from the 11th  - 13th  c.) and which contain portions of the Psalms. These fragments are collected today in two different “codici-contenitori” [v]: Crypt. gr. 14 and Crypt. gr. 79 [vi].

To Crypt. gr. 14 belong the fragments:

Since it is impossible to retrace the manuscripts from which these fragments came, the most significant difficulty in describing them lies in the impossibility of clearly tracing their origin. For this reason, only their content can be well identified and described (except for the scriptura inferior of folio 28 of the Crypt. gr. 79, which is very difficult to decipher).

Another problematic codex, divided into various parts, is the miscellaneous manuscript Vat. gr. 2296 (Ra 1804–1806), which contains multiple codicological units in parchment, palimpsest, and paper. The history of this miscellaneous collection (whose complexity had already been highlighted by Rahlfs) is difficult to reconstruct:

Only the note reported here tells us something about the history of this miscellaneous collection. For the rest, it is only via their codicological and textual investigation that we can clarify the composition and content of their various portions.

Similarly, the examination of a text – together with its accurate codicological analysis – can also help us in studying more complex cases such as palimpsests and manuscripts severely damaged by carelessness or by natural/historical events.

Since the beginning of my work in Göttingen, I had to analyse some palimpsests (manuscripts rewritten on re-used parchments from which every trace of the previous writing has been erased or washed off) and describe them. I would like to mention briefly Ra 1100: a codex bis rescriptus that I was able to elaborate (using modern technologies) graphically and partially decipher during the first year of my work on our project. 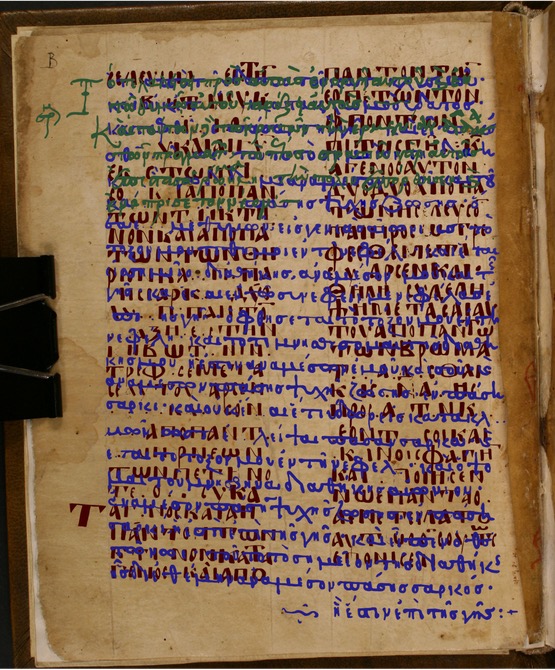 The manuscript is a Greek psalter composed of 242 folios, of which ff. IXr–XIv are palimpsest. These parchments contain in their scriptura superior a fragment from a musical manuscript (f. IXr–v) and a commentary on Psalms 1-2 (ff. Xr–XIv) written in “scrittura di Reggio” and dated to the 12th c. The scriptura media contains some fragments from an Old Testament lectionary (ff. Xr–XIv) in “scrittura rossanese” of the 11th - 12th c., while the scriptura inferior transmits – again – parts of an Old Testament lectionary written in “Ogivale diritta” and dated to the 8th c.

Finally, we come to the last category of problematic manuscripts represented here by the burned manuscripts of Turin. On the night between the 25th and 26th of January 1904, the Biblioteca Nazionale Universitaria di Torino was hit by a disastrous fire that caused considerable damage. Most of the manuscripts were heavily damaged (e.g. Ra 141) and many were destroyed [viii].

The surviving artifacts were then collected in a room of the library and kept there for a while. On January 26th 1904, a Commission was established to assess the damage; recognize the manuscripts, and assist in their restoration. After the fire, the library continued to increase its collections. Unfortunately, due to a bombing on the 8th of December 1942, the library was again devastated by flames, and about 150,000 volumes were destroyed.

Among the Greek manuscripts almost destroyed by that fire is the psalter Taur. gr. B.VII 30 (Pasini 342), Ra 1208, which was a small format Greek psalter, written in “ogivale inclinata” and dated to the 8th c., containing an ancient catena commentary to the Psalms and the Odes (Typus XXVI) [ix].  The manuscript originally consisted of 303 leaves, of which only 203 have survived.

The Taurinensis was restored, between 1912 and 1918, by Carlo Marrè, the official restorer of the Turin library, and it appears today as a set of single leaves or bifolia unbound and collected in a paper folder.

f. XXIII bv–ar, before and after the restoration made by Carlo Marrè.

The codex was disrupted during the restoration: the original binding was removed, and the ancient quires loosened. The surviving leaves, agglutinated, were first detached and stretched out, and finally, each folio (or bifolia) was placed on paper supports. While, on the one hand, the restoration has made it possible to preserve much of the manuscript, on the other hand, in some cases, the individual folios are in complete disarray, making it complicated to study the text transmitted in it. 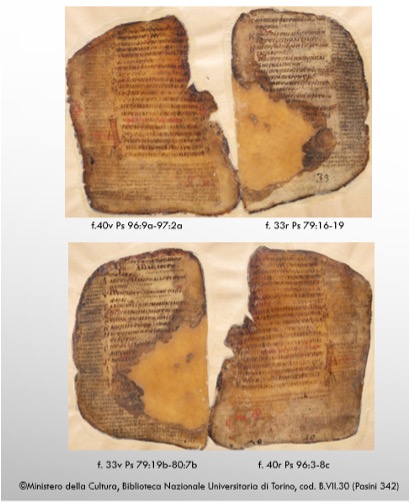 Example of some difficult bifolia

For this reason, while describing the manuscript, my main task was to understand its current appearance by analysing it first from a codicological point of view and then proposing a new virtual reconstruction (also thanks to the help of high-resolution digital images created by Schrift-Bilder.org).

Through this virtual reorganization, the leaves have been repositioned in order, side by side on a virtual page, based on the text they contain, facilitating the uninterrupted reading of the content. 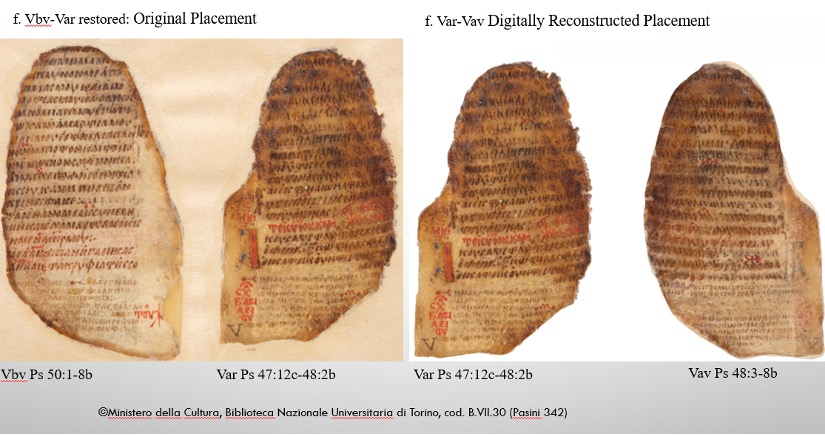 As a final result of this reconstruction, we can now assume that the Taurinensis originally contained 38 quires, of which only 27 have survived today. The manuscript has lost about 11 quires; 9/10 of these stood at the beginning of the codex and contained the Proemia to the Psalms and Psalms 1-46:1-9. The remaining quires were at the end and contained the rest of the liturgical texts.

An important witness of the original shape of the Taurinensis is represented today by a precious fragment kept in the Biblioteca Capitolare di Verona.

The fragment (shelfmark CXIX) consists of a leaf with the Proemium to the Psalms by Cyril of Alexandria, together with a Proemium to the Psalms by Hesychius of Jerusalem and belongs to the Taurinensis. The parchment leaf was brought to Verona by Scipione Maffei. In 1755, after his death, the fragment entered the Capitolare, where it remained hidden for many years, before being discovered by chance by Cardinal Mai around 1844 [x]. 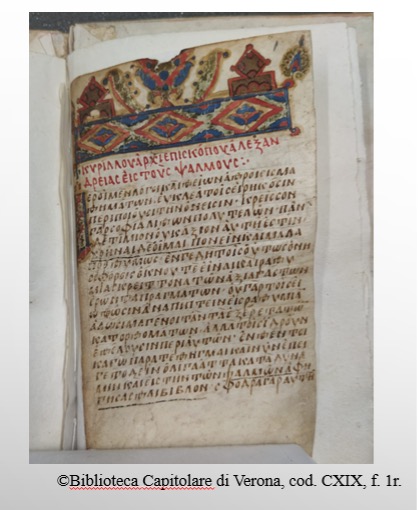 This fragment, belonging to the manuscript Taurinensis B. VII. 30, and being preserved today in another library, falls entirely into the membra disiecta mentioned above.

As we have seen, manuscripts are often protagonists of deep traumas: sometimes linked to human action (leaves taken away from a manuscript and transported to different libraries), other times damaged by disasters.

Over the centuries, many libraries and places of culture have been damaged, or even destroyed, by major and catastrophic incidents.

For example, we can remember the fire that destroyed the Escorial in 1671. In Italy, the 1908 earthquake that struck and razed the city of Messina surely did not spare the library ad its collection; in 1966, a massive flood submerged Florence and seriously damaged the book and the manuscript collection of the Biblioteca nazionale centrale. And how can we forget the destroyed libraries during the Second World War? Like the Library of the University of Louvain, demolished in 1940 due to a bombing.

Every time, the manuscripts have become witnesses of all these events, and it is through the study of their "wounds" that we can read in them the traces of the past and our more recent history.

[iii] Georgi Parpulov has recognised the origin of these fragments, cf. Parpulov, Toward a History of Byzantine Psalters ca. 850-1350 AD, Plovdiv 2014, Appendix, B1.