The Psalter Manuscripts of Andros

Thanks to the support of the Göttingen Academy of Sciences and Humanities, I recently had the opportunity to study in situ six Psalter manuscripts that are currently kept at the Monasteries of Zoodochos Peges (known also as Hagias) and Hagios Nikolaos in the Greek island of Andros. The manuscripts are dated from the 13th to the 16th centuries and have not been studied before in detail. They all transmit the most common textual type of the Psalms during the Byzantine period, namely the Lucianic text, but they also have several interesting individual characteristics. The studying of the manuscripts of a particular geographical region, often reveals traces of the local history, as well as information about their reuse throughout the centuries in a particular place.[i]

Once I arrived to Batsi, a scenic village close to the monastery of Zoodochos Pege, I admired its many white chapels and I realized that religious life still plays an important role in Andros. Similar picturesque chapels can be seen everywhere in the island and the local people often attend their religious services. Time also seems to flow differently in Andros compared to the speed of the modern lifestyle, as it is adjusted to the liturgical calendar and to the general mystical atmosphere of the island.[ii] 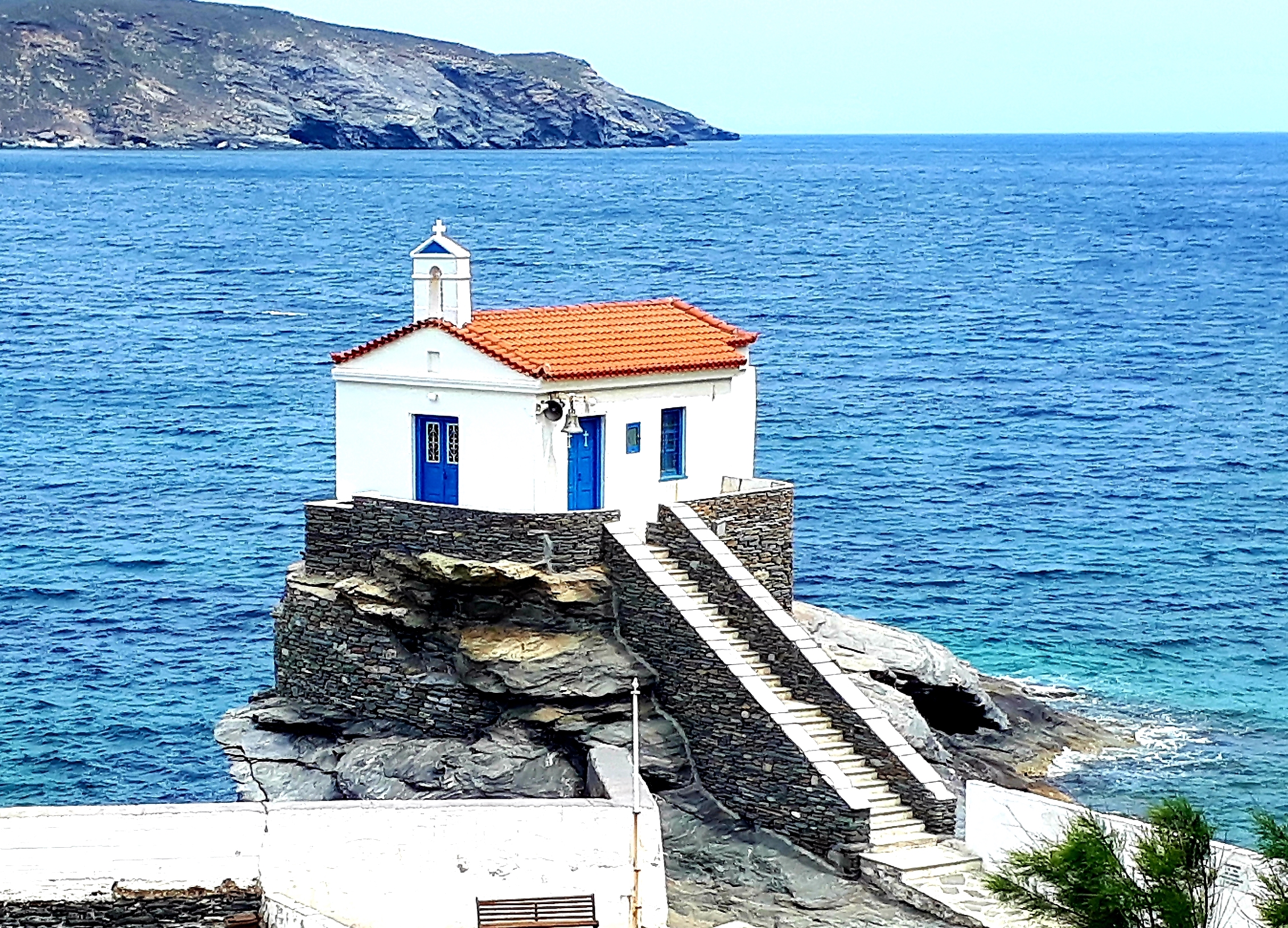 During the first day of my visit, I was warmly welcomed by the nuns of Zoodochou Peges, an old monastery that at first glance looks like a fortress. The first manuscript that I consulted was Ra 1401. This is a small Psalter, which was written at the beginning of the fourteenth century by a certain monk called Theodosios. It is distinguished by its decorated initials in red and blue color, as well as by its elegant, archaizing script. Theodosios was fond of poetry, since he marks each important section of the manuscript with book epigrams (namely poems related to the content and the production of the manuscript). Some of the poems have been previously edited by Lampros and Parpulov.[iii] I will focus on the unpublished verses of the manuscript. Before Psalm 77 the reader can find two epigrams. The first one gives high praise to the Psalter as a wise and excellent book and it also implies that Psalm 77 signifies the middle of the Psalter. This is in accordance with the Byzantines’ perception of this particular Psalm: it was common for the scribes of that time to mark its beginning with headbands and other decorative elements. 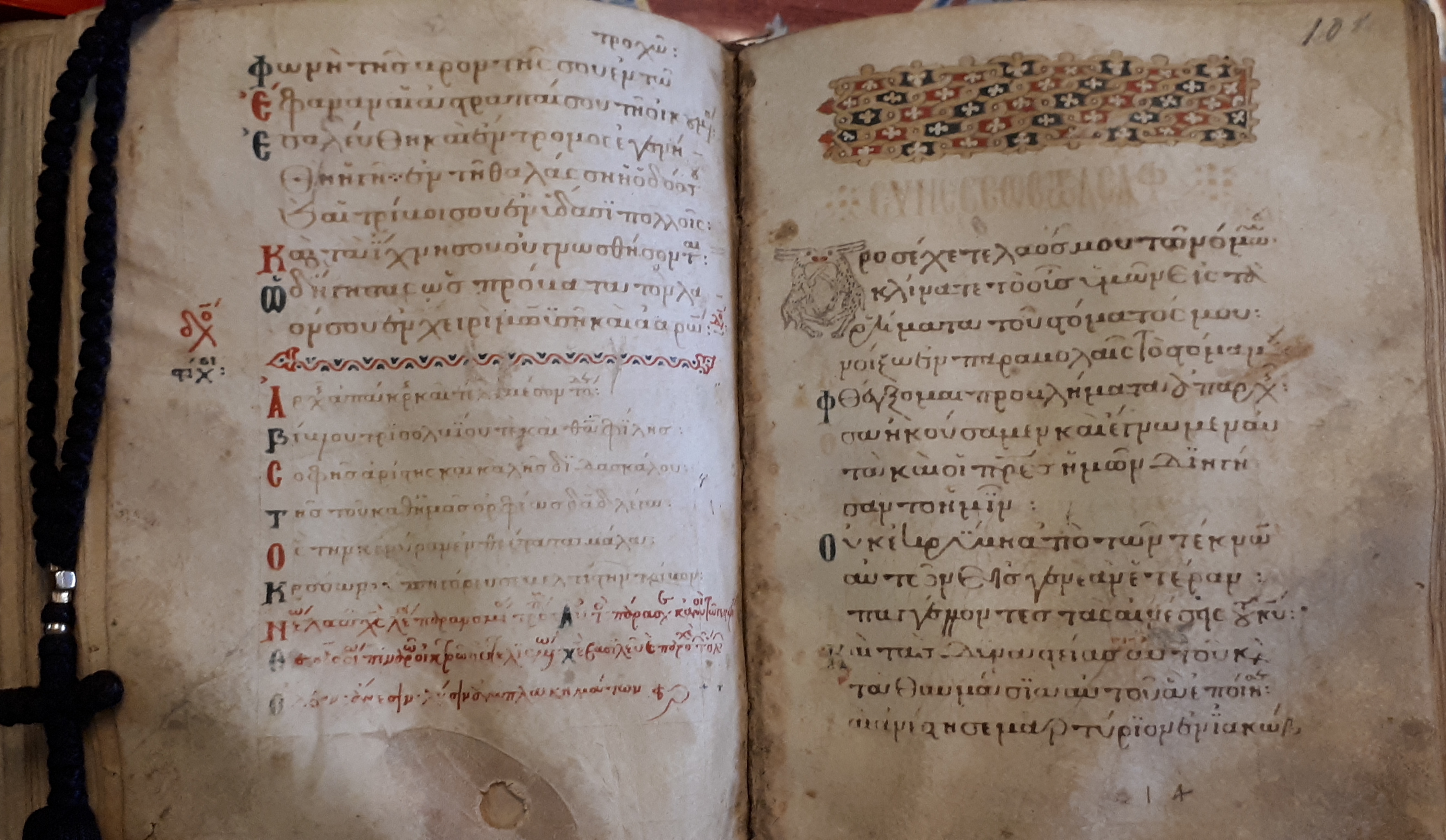 From the very beginning till the end this is the middle
of the thrice-blessed book, which is beloved to God:
a wise, excellent <book> and a good teacher.
I am talking about the <book> of our own Orpheus, of David,[iv]
who, while is playing the lyre most divinely, showed us the best path.

The second poem echoes the content of Psalm 77 and functions as a scribal prayer to Christ.

Christ talks to the new nation about the ways of lawlessness;
may you Christ, may also grant me, the scribe,
the dirty Theodosios, the miserable and disreputable,
king and provider of everything,
prosperity, relief and forgiveness of sins.

The first verse of the poem is quite obscure, but it seems to allude to the summary title that Eusebius of Ceasarea ascribes to the 77th Psalm, whereby he offers a similar Christological interpretation of its content  “Χριστοῦ διαστολὴ πρὸς τὴν Ἐκκλησίαν, περὶ τῆς τοῦ προτέρου λαοῦ παρανομίας” (Christ’s explanation to the church about the lawlessness of the previous people)[v]. The “new nation” mentioned in the poem might refer to the church, whereas the “previous nation” in Eusebius’ text alludes to the Israelites (cf. “ἐκλεκτοὺς τοῦ ‘Ισραὴλ” in Ps. 77:31). It is also worth noting the zoomorphic initial of the Psalm 77: the letter π is formed by two rabbits or hares. Contrary to the Latin manuscripts, depictions of rabbits are uncommon in Byzantine manuscripts.[vi] The end of the Psalm 151 is also marked by three poems.[vii] Below I provide the text of the third one, which stylistically resembles a colophon. 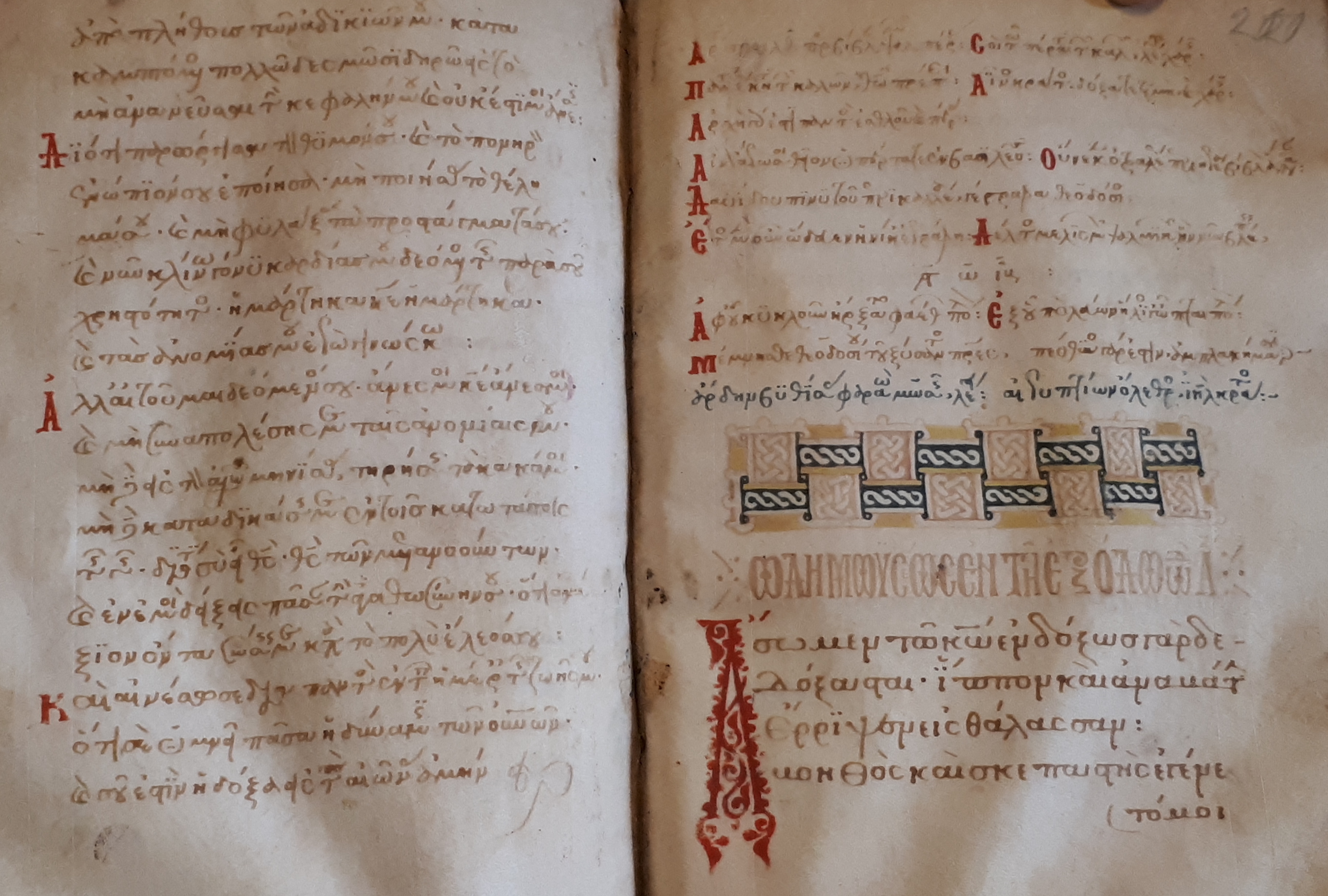 The year, was then running, when the book of the psalmic melodies
was written, the one which you now behold,

at the time when Phaethon started circling the sky,
when the sun, moving around, can be seen in the sky.
Remember, fathers, the scribe Theodosios,
as he is responsible for sins.

What is interesting in this poem is that it informs the readers about the date of the Psalter’s completion (a. 1304).[ix]  For some unknown reason, Lampros wrongly dated the manuscript to the year 1292. Theodosios' reference to the mythological figure of Phaethon and to his driving of the sun-chariot around earth is a hint regarding the time of completion of his writing task.[x] Since the sun was visible in the sky, we can assume that he completed the book during the day and possibly in the morning hours.

Another Psalter manuscript from the same monastery is Ra 1402, which was copied in the 15th century by a priest called Loukas Mylonas. As he informs us in his colophon on f. 343r, he came from the noble Byzantine family of Dalassenoi in Caesarea. His script resembles the so-called Hodegon style and can be distinguished by its characteristic Φ letters with the long descenders.  The titles and the initials of each Psalm are rubricated. 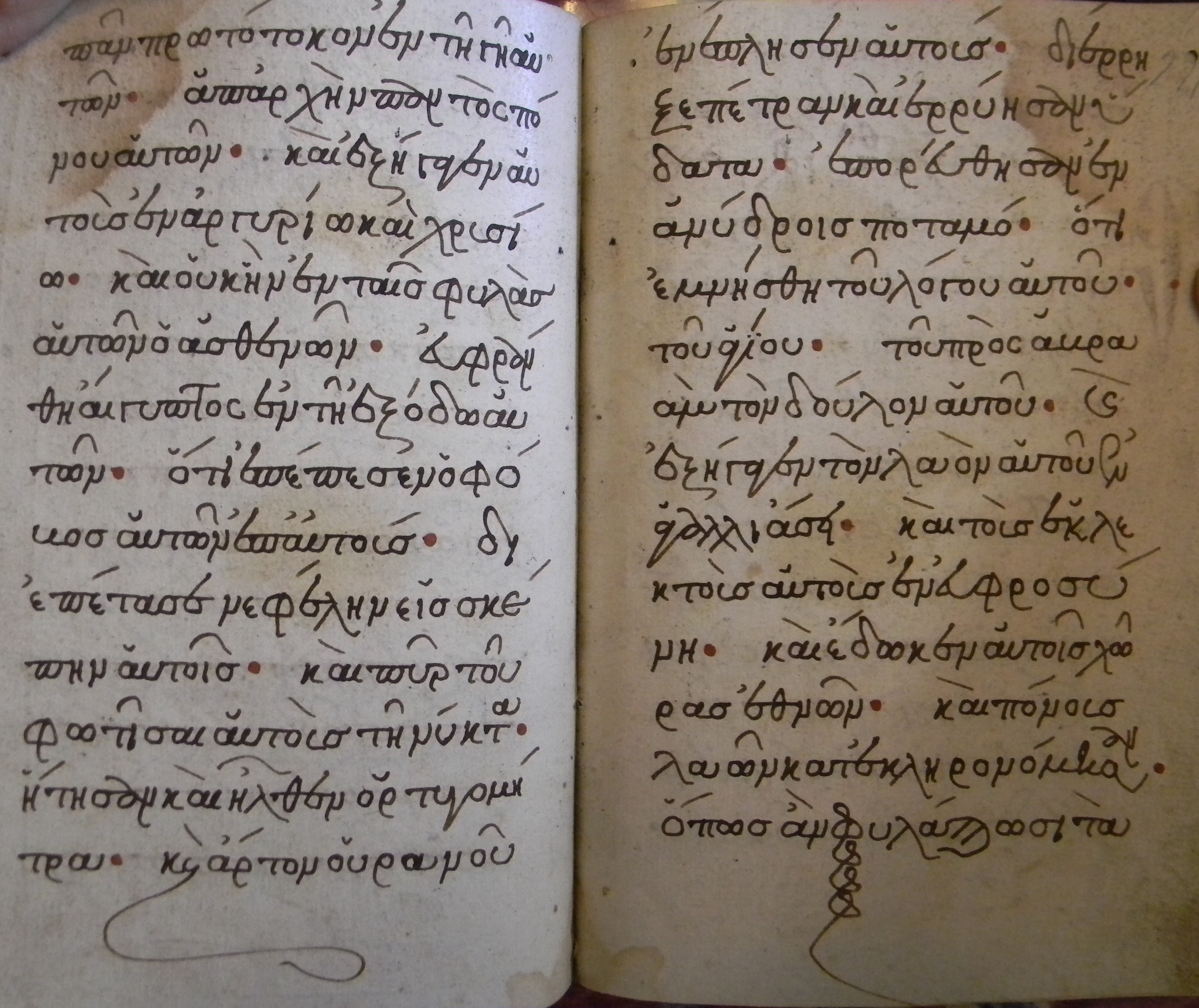 Interestingly, the last part of the manuscript consists of two folios, which derive from an older parchment manuscript and transmit fragments of the Ladder of Paradise by John Klimax. Based on palaeographical evidence, we were able to date them to the 11th century.

Another manuscript with Psalms from the Monastery of Zoodochos Peges, which has not been catalogued by Alfred Rahlfs, is a small-sized Horologion. The beginning and the end of the manuscript have been lost and its tiny archaizing script could be dated to the 13th century. Its structure, though initially difficult to understand, became apparent after following a clever suggestion by the nuns to compare it to a modern edition of an Horologion by the Apostoliki Diakonia of the Church of Greece: its division into different liturgical services (Nocturns, Matins, Vespers, Compline) follows the common structure of the Byzantine Horologia.

The Monastery of Hagios Nikolaos

Another monastery on the island known for its collection of Byzantine and Post-byzantine manuscripts is the monastery of Hagios Nikolaos, which is located 10 km away from Chora, the capital of Andros. Hagios Nikolaos is considered the protector of the sailors in the Orthodox church, which explains why he is highly venerated on the island. Entering in the church of the monastery, one can see an astonishing collection of many votive offerings in the shape of ships, offered to St. Nikolaos by family members of the sailors in order to keep their loved ones safe.[xi] 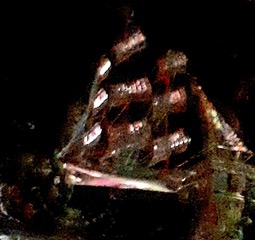 A highly composite and fragile manuscript is the codex Ra 1403. It is dated to the 14th century and contains the Psalms, several books of the New Testament, as well as liturgical hymns. As is the case with several manuscripts from Andros, its paper folios are very thin and its initials are elaborate and rubricated. The double lambda ligature has a characteristic form in this handwriting. 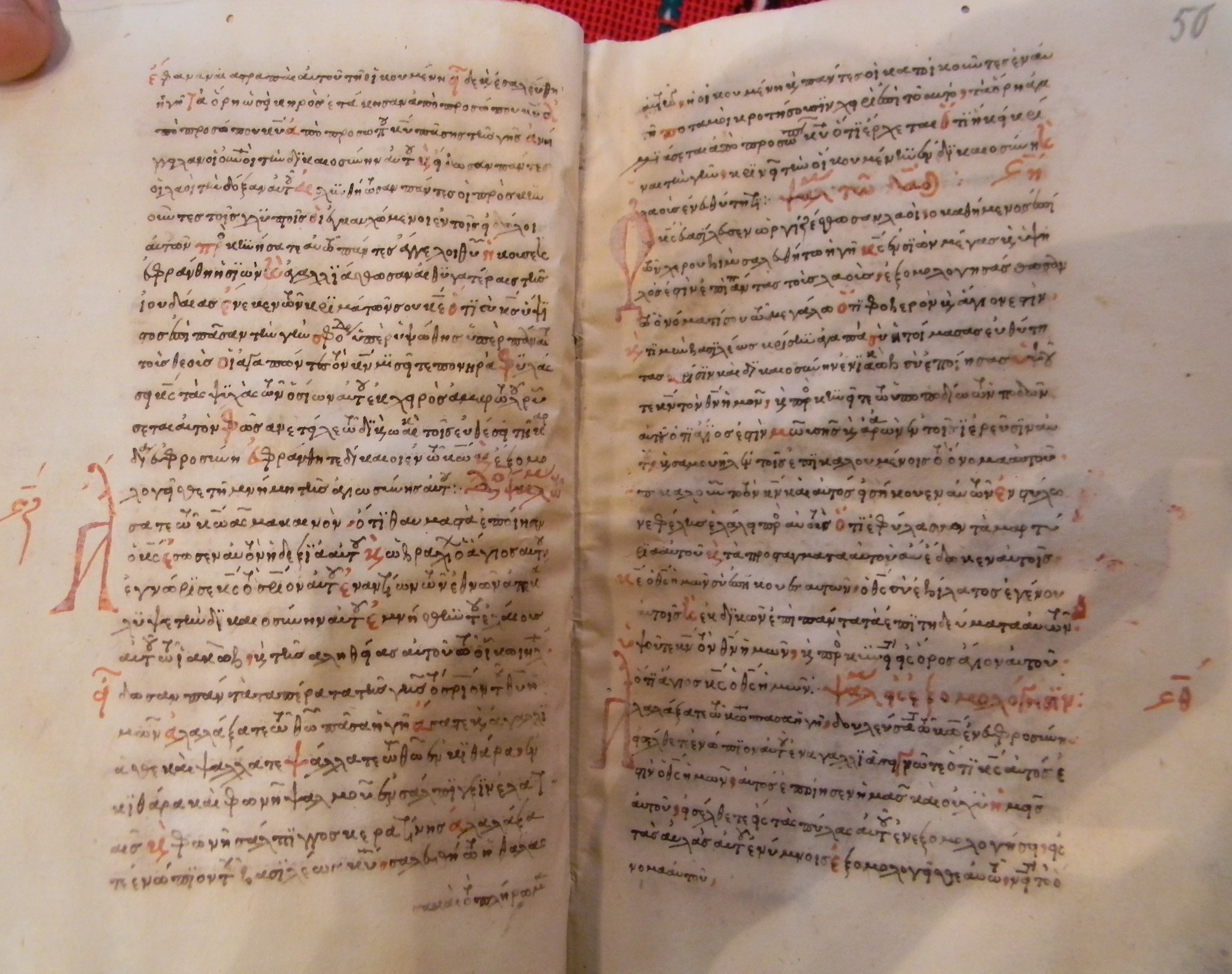 What I also found interesting in this manuscript is the beginning of an unknown kontakion, which was added to the end of the manuscript by a later hand.

Kontakion dedicated to St Demetrios, according to “ἐπεφάνης σήμερον”

With the scent of your fragrant ointment, glory of the martyrs, divine Demetrie, I ask you to remove from my soul the stench of my passions, as I am responsible for enormous <ones>.

This is a well-written Psalter containing the Psalms, the Odes and several notes by later owners. It was dated by Lampros to the 12th century, but its writing style has some characteristics that point to a later date (e.g., tall τ and γ). Specifically, it consists of an archaizing script that could be dated to the second half of the 13th century. Its cherry-red initials and titles contribute to its elegant appearance. 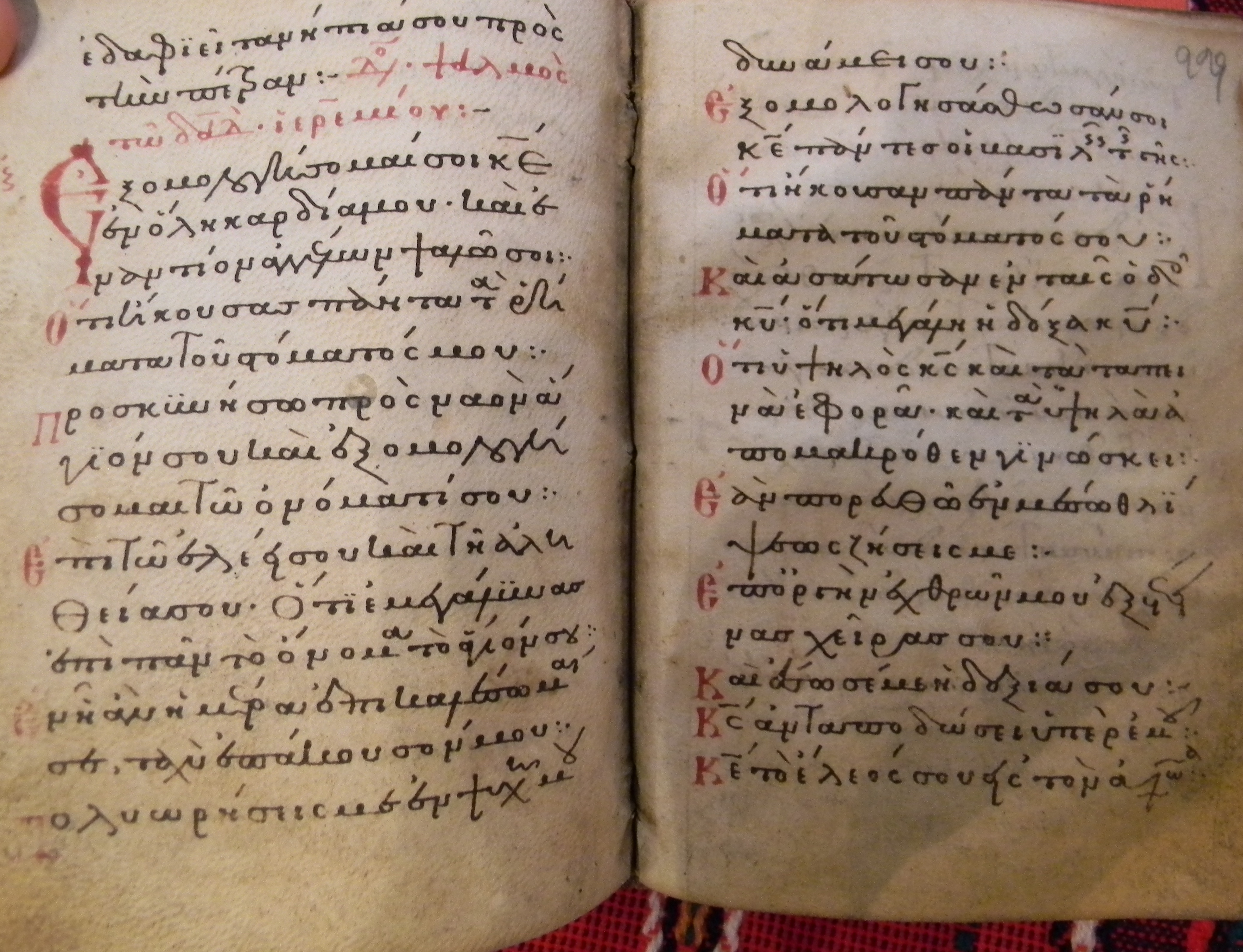 The last manuscript I have examined is the most recent one. It is a 16th-century Psalter that is incomplete due to the loss of folios at its beginning and end. This is also a carefully written manuscript in an archaizing script, which consists of ornamented enlarged initials in red ink. It has been restored in the past in the Kairios Library in Andros. 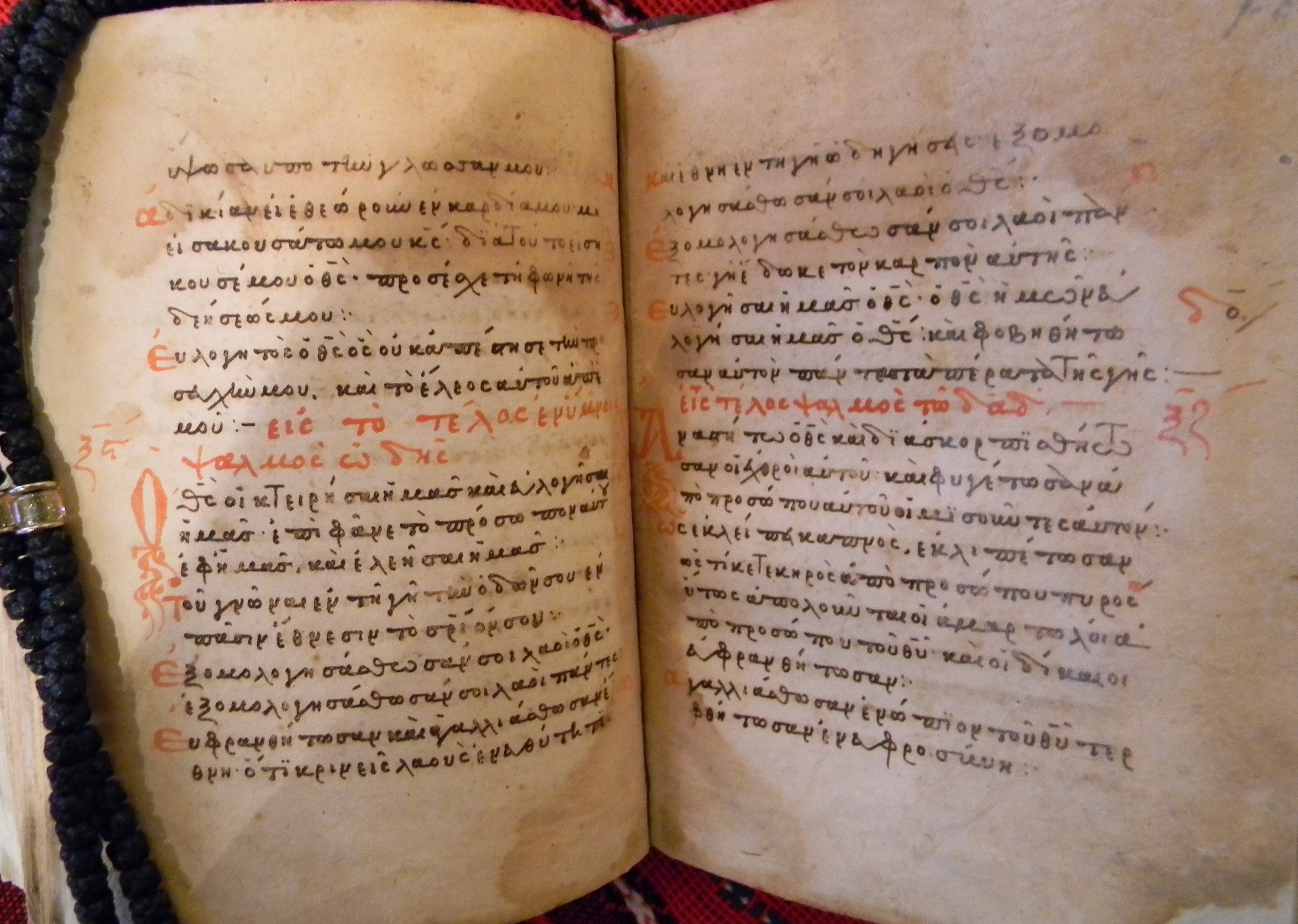 Concluding my overview of the Psalter manuscripts of Andros, I would like to express my sincere thanks to the bishop Dorotheos of Syrou for giving me his permission to carry out my research on the Andros Psalter manuscripts. I am also grateful to the abbot Dorotheos, to the abbess Parthenia, to the monk Aniketos, as well as to the nuns Olympias, Magdalene and Panarete for their hospitality and help with practical matters. Lastly, I would like to thank Marina Loukaki for her useful feedback on the poems and Aikaterine Thoma, who gladly accompanied me on this exciting journey of knowledge.

[i] This does not mean, however, that all of the manuscripts were necessarily produced on Andros. Monks might have brought them to the monasteries along with other belongings. It is noteworthy that the name of the island does not occur in the colophons.

[ii] On the concept of time in Orthodox Christianity see E. Kessareas, “Late Modernity, Time, and Orthodoxy”, available at: https://publicorthodoxy.org/2021/04/12/late-modernity-time-orthodoxy/

[iv] David is portrayed as the Orpheus of Christians. This is a topos in Byzantine poetry and art.

[vi] For some indicative examples in the Latin manuscripts see C. Westwel, “Medieval rabbits: the good, the bad and the bizarre” and E. Jackson, “Medieval killer rabbits: when bunnies strike back”, available at:  https://blogs.bl.uk/digitisedmanuscripts/2020/04/medieval-rabbits-the-good-the-bad-and-the-bizarre.html and https://blogs.bl.uk/digitisedmanuscripts/2021/06/killer-rabbits.html

[ix] Parpulov was the first, who dated the manuscript correctly, see Parpulov (2014: Appendix B1).

[x] In Byzantine poetry Phaethon is often identified with the sun itself.

[xi] These votive objects are called τάματα (tamata) in Greek and usually represent parts of the body (e.g., eyes, legs, heart) depending on the health problem for which the faithful is asking saintly support.

[xii] Venetian and other Western rulers governed the island from 1204 until 1566. For an historical account of Andros during this period, see D. Polemis, History of Andros, Andros 2016, pp. 68-81.